For a number of years, I've been dreaming of heading out to British Columbia's Fraser River, to chase one of the planet's biggest and strongest freshwater fish, the mighty white sturgeon. For a number of reasons, I wasn't able to get out there in the past, but I finally decided to pull the trigger on this fishing trip a couple months ago. I invited my friend Mike along, and thankfully, he was as game about this trip as I was.

After landing in Vancouver airport Sunday morning, we drove East to our B&B in Chilliwack, stocked up on supplies, check out some local sights, and headed off to get some sleep before heading out Monday morning, for the first of three consecutive days fishing on the Fraser.

Our guide for the first day of the trip was Steve Kaye, owner of  Sturgeon hunter fishing . Steve runs the operation, and has been guiding for white sturgeon on the Fraser River for over two decades. Aside from having a ton of experience, his boats are perfectly suited for the style of fishing we were going to use to catch some of these prehistoric river monsters. 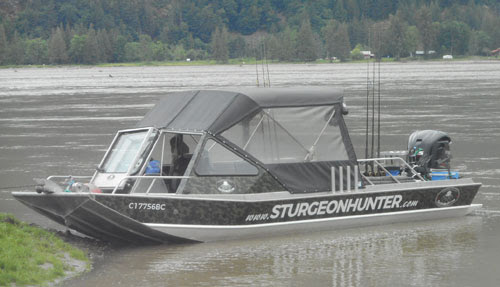 After making sure that our fishing licenses and mandatory sturgeon conservation tags were in order, we headed off to a small slough in the river to catch some  squawfish (Northern pikeminnows) as bait. In addition to the squawfish, they also use chunks of salmon meat, ooligans (some sort of local smelt), and eel.

Once we had enough bait, we made the run to Steve's first spot. 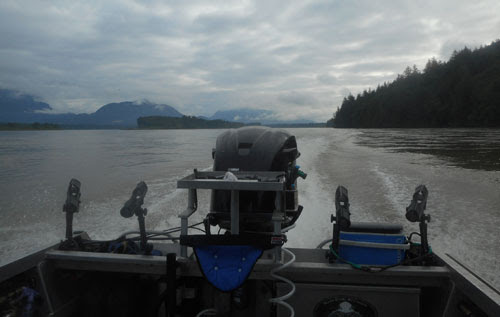 As with still fishing other species of big bottom feeders such as lake sturgeon or blue catfish, one of the keys to success is to take the time to find big fish before setting up the lines. Sonars with sidescan are ideal, as the let you see fish off to the sides of the boat, and to the trained eye, differentiating between bigger and smaller fish is simple enough. Once a good number of sizeable sturgeons are located, boat is anchored upstream of the location, and 1 rod per person is set, using big 16-20 oz sinkers to keep the bait on bottom. 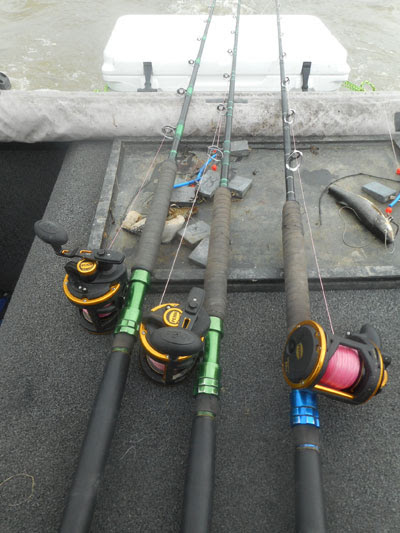 The rods are then placed in holders, and the waiting game begins... 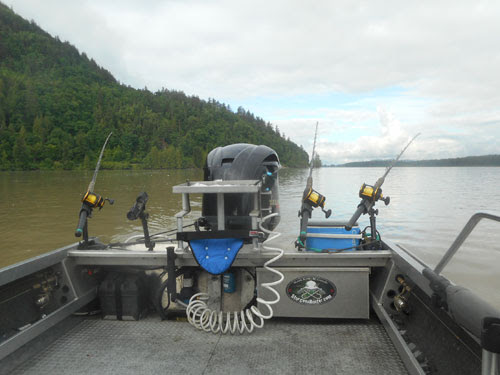 After some small bumps until mid morning, we finally hooked into out first sturgeon of the trip. I was first up, so I took the heavy rod, and fought the fish, with the help of a fighting belt. Unfortunately, the belt should have been placed lower, so the fight was more brutal than necessary. I sort of burned my arms out a bit too much due to improper techniques, but was still very happy to land my biggest freshwater fish up to that point, as well as cross the last freshwater species of sportfish off my bucket list. Measuring about 6.5 feet and weighing en estimated 150 lbs, we opted to release it off the side of the boat, as BC fishing regulations forbid removing sturgeons over 60 inches from the water. Fish are measure to the fork of the tail, rather than the tip as we do here in Quebec, so they are actually a bit longer than the measurements we took. 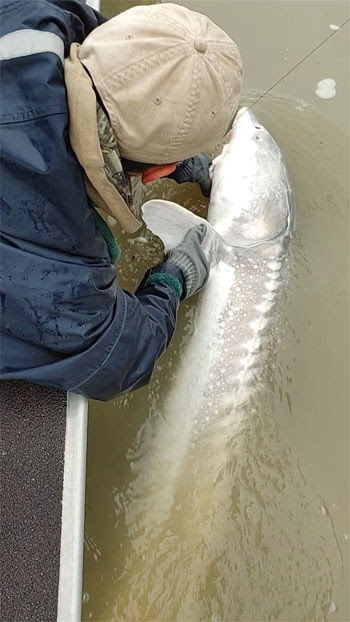 Mike was up for the next fish. This one turned out to be slightly smaller, and Mike muscle the sturgeon to the boat rather quickly. 60 inches on the nose, we were able to get it on deck fr a quick pic before releasing it. 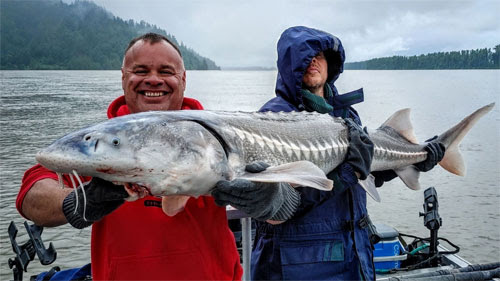 I was up for the next fish, it was already early afternoon by the time if hit. With my arms still quite sore, and this sturgeon being considerably bigger than my first one, we opted to tow it to shore for in water pics after the battle. Being that the only spot we could land it and get pics was over a kilometer away, most of the fight took place while moving as opposed to being anchored. Mike and I tag teamed this one, taking turns fighting it. As most white sturgeons do, the fish jumped a few times, giving us an idea of it's size. Ended up measuring just over 7 feet long at the fork, and estimated to weigh about 225 lbs by our guide. 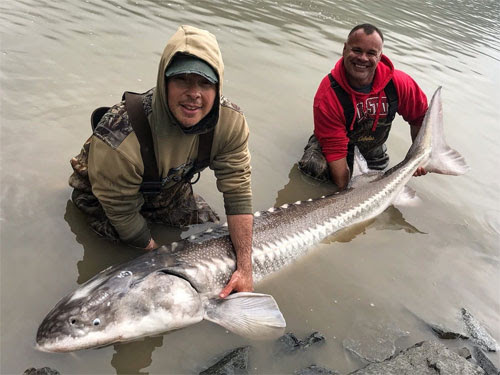 That was all for day one, Mike and I were thrilled to land some real nice fish.

We met up with Steve again for our second day of white sturgeon fishing on the Fraser River. The rain had stopped, we faced a mix of sun and clouds, and slightly warmer weather. My was up for the first fish of the day. Once it hit and jumped a couple times, we knew it was bigger than all the fish caught the previous day. Mike handled the beast of a fight like a pro, and we landed this very nice white sturgeon measuring 90 inches (7.6') at the fork, weighing an estimated 250 lbs or so. 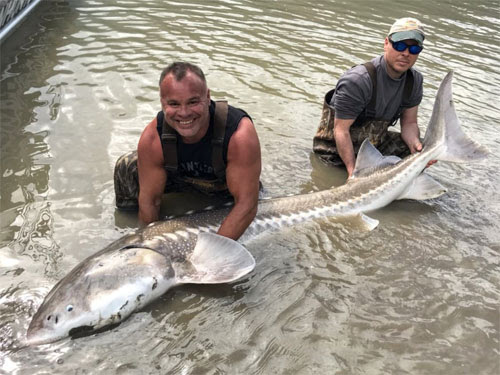 My next fish was a good 6+ feet long, gave a few jumps, before finding a big sunken tree nearby to get tangled into. Try as we might, we weren't able to get it free from any of the angles, and eventually the line snapped as Steve was trying to work it out of the wood.

Following fish turned out to be the smallest of the trip, I had a rather easy time reeling it in on the oversized rods. A bit over 4 feet long, we heaved it on board for a quick pic before the torpedo release. 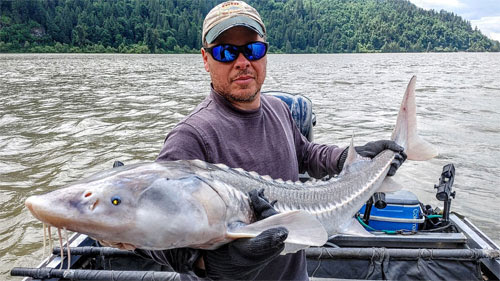 Mike then hooked into what was likely a 300 + lbs fish. It jumped a few times, and then headed for some sunken trees downstream. Steve pulled the anchor in attempt to get it away from the trees, as Mike muscled the huge sturgeon away from danger. It then ran downstream and started to cross the river, as Steve circled the boat away from the area that had shallow water and sunken logs. A few more jumps, and then the giant dove down making a screaming run, just before the line hit some underwater and snapped. Total heartbreaker, that ended out second day on the water.

Steve employs a few other guides in his operation, and we met up with Rod, just as he was getting launched. 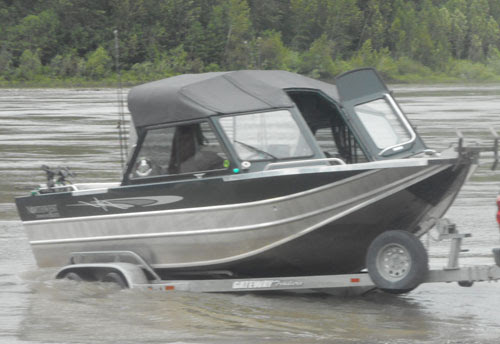 Rods style is a bit different than Steve's, and he spent a lot more time cruising around looking for bigger fish on the sidescan sonar. Eventually, he found a spot he liked, and we got set up. Mike was up for the first fish, and when it hit, it seems to have snagged or wrapped itself in the line as opposed to a standard hookset in the mouth. After a few minutes of just holding bottom and not much running or headhakes, it popped off.

We set up again on the same spot, and this time, it didn't take long until we got bit again. As we were fishing an area with significantly more current than the previous days, this was by far the toughest fight we had to deal with. The big sturgeon ran close to 1000 feet downstream after jumping. Mike fought to turn it, and at some point, I jumped in to crank it in. Once my arms eventually from recovering all that line and trying to get it to the surface boatside, Mike to the rod just in time for it to run back downstream again. It was being a lot tougher this time, either digging down or dodging, and jumping a few times, before I took over again. When I finally got it near the boat, Mike took over again, and eventually muscles it into submission, while we towed it to shore for pics. This Sturgeon was probably the fattest one, with a girth of 43 inches, the a fork measurement of 86 inches was a bit shorter than his big one landed the previous day, but weight roughly the same at 250 lbs. 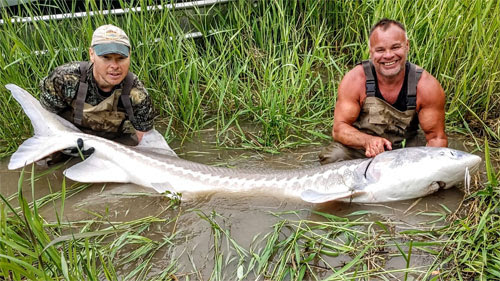 Needless to say, Mike was quite happy, as evident in this head shot. 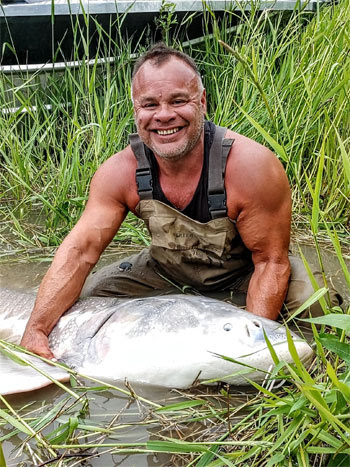 Rest of the day was calm. Just as I was joking about the remote possibility of landing the biggest fish of the trip at the last minute, the line got hit. I grabbed the rod just in time for the fish to make a 1000 foot run downstream, during which it jumped a couple times. I was quite sure it would be one of the biggest of the trip. After a while, I finally got it turned. I was expecting it to run directly at us, but instead it sort of just sat in current allowing to slowly work it back to the boat. I took over 1/2 hour to do so, and once I got it boatside, I figured it make another crazy ruin downstream. Luckily for us, it seemed to have gassed itself out, I brought it boatside, and handed mike the rod to hold why we towed it back to shore for pics and I git my waders on.

When we finally beached, and were about the get fish up in the shallows for pics, it decided to start fighting again. With both myself and Rod in the water, Mike kept trying to muscle it up over a mud ridge, in what was likely the most intense couple minutes of the trip. He finally did so, and we got some nice shots of the biggest sturgeon of trip, measuring 91 inches (7.7') at the fork, and weighing at least 250 lbs according to Rod's estimate. 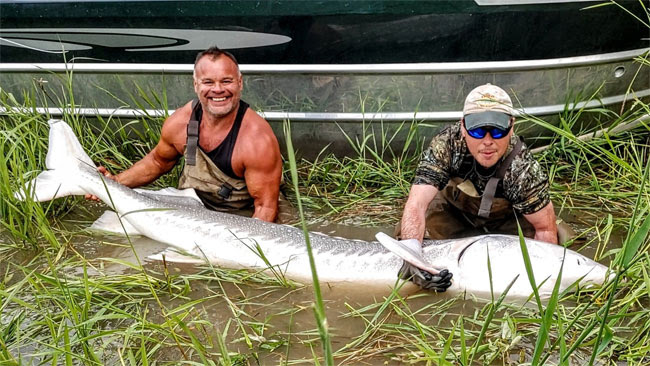 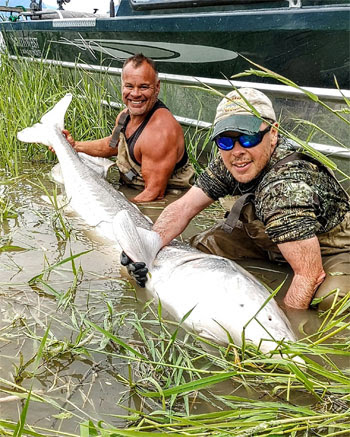 The fishing trip could not have had a better ending. White sturgeon are by far the most powerful freshwater fish I've ever fought, and the strong current in the Fraser River only makes it tougher, yet more rewarding to land one of these magical beasts. They are almost entirely made of muscle, and giant torpedo heads with powerful tails generate insane amounts of power in strong current. 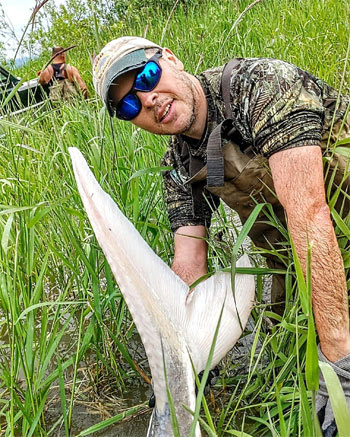 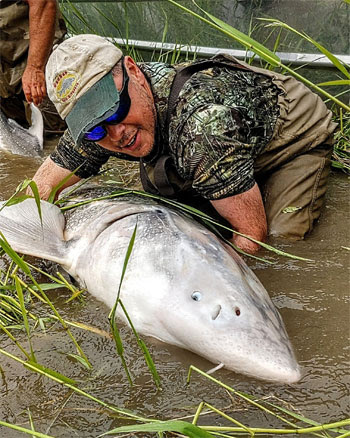 Reflecting on my first ever trip to British Columbia and landing our first few white sturgeons, I have a hunch that we may end up back there at some point in time to have another shot at the real prehistoric river monsters of the Fraser River.

As usual many thanks are in order. First, I thank God for giving me the opportunity and means have lived this experience. I thank my wonderful wife for holding down the fort while I was away, and my friend Mike for joining me. With his matching sense of humor and beastly strength, I can't think of many friends better suited to chase giants with.

Last but not least, I'd like to thank our guides Steve and Rod from https://www.sturgeonhunter.com/ . Having fished with many guides both in the USA and Canada, I can safely say that they are among the most knowledgeable and professional guides I've fished with. Their boats and equipment are top notch, and their combined decades of experience fishing for white sturgeons on the FRaser river are a huge part of what made this latest fishing adventure a smashing success.

Posted by Freshwater Phil at 7:39 AM