The past 2-3 weeks have hands down been my slowest ice fishing in a good decade or so. After not getting any ice fishing done in the last week of February, followed by a lackluster (borderline disastrous) 4 day ice fishing trip with Ari, the followed by back to back outings getting skunked for pike using baited tip up lines, I was ready for one more shot at ice fishing before calling it a season. With today's high reaching 10 C, and a few days next week with a forecast in the mid teens, I have some open water fishing planned for then.

For this last ice fishing outing, I gave myself the choice of two spots. I had never fished the first one, and after doing much research, I gave up on that plan. Instead, I headed back to a lake I first tried last spring, just as covid was starting to hit Canada. I had good success there, catching some monstrous white perch, as well as a decent bass, just before the provincial shutdown affected any more possible outings there at that time.

For today's outing, I was expecting a tough bite, as I know that place has been getting a crazier than normal amount of fishing pressure, as have many other spots.

I got there shortly before 9 AM, and trekked out to where I was to get started. The plan was to "run and gun", i.e. fishing each ice hole for just a few minutes and moving along. Not wanting to get bogged down by smaller fish, I rigged my main line with a mid size Yo Zuri rattlebait, and the follow up "finesse" line with a W3 Rapala jigging rap.

Drilling 18 to 20 inches of ice was a breeze with my Ion G2 auger, but fish were far an few in between. 2 hours into the outing, all I had landed was one small perch. On my 18th ice hole, I dropped the rattlebait down, and didn't see any activity on my flasher. I played the lure for a few minutes, and just when I pulled it out of the water, I noticed a big mark appear on the screen, suspended at 8 feet over 13. I immediately dropped the lure back down to entice the fish to bite, it took me another minute or so to get the fish to react and hit, as I increased the aggressiveness of my jigging motions.

As soon as I got hit, I know I had hooked into a good fish. Luckily for me, I had stripped some frayed line before getting started, and re-tied the lure. I actually had to plunge my rod into the hole to get the rod tip down below the ice, in order to avoid getting the 6 lbs test flourocarbon line cut at the holes bottom.

When I finally maneuvered the big bass head up the hole, I knew I had my biggest bass of the winter on the line. I was well hooked, and I landed it easily. Snapped a few pics before removing my lure. 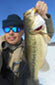 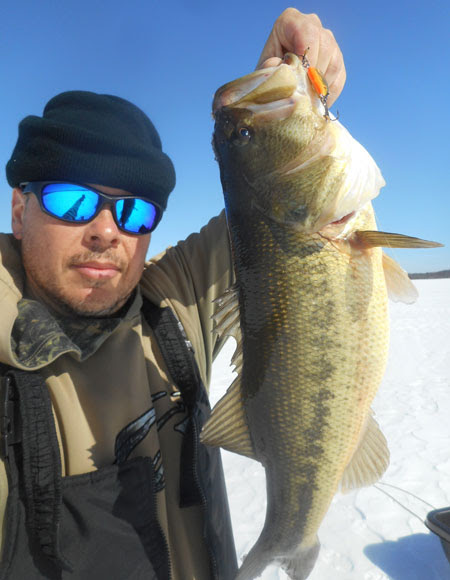 Once I removed the lure, the fat largemouth bass weighed in over 4 lbs, and measured just about 20 inches. 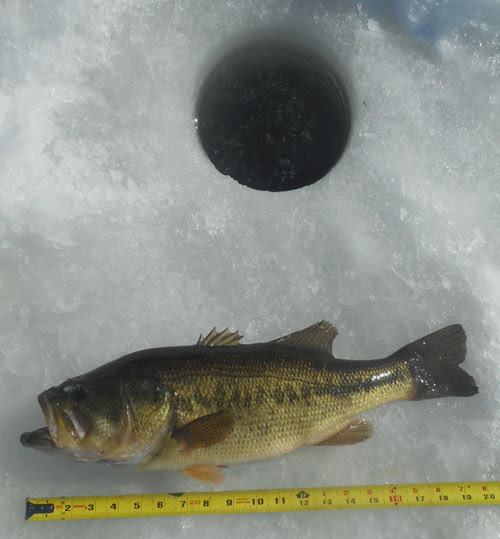 With the big bass still in perfect shape, it was a quick and successful release. 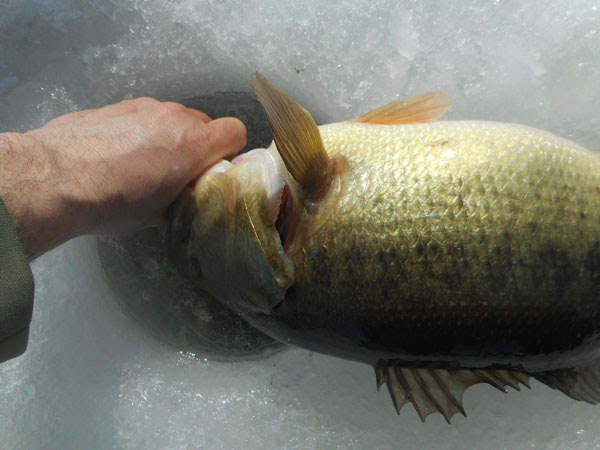 You'll noticed the big girth in relation to my 8 inch ice hole. Sure glad I wasn't using a 6 inch auger...

As the midday rolled in, the outside temperature soared up 17 degrees, from -7C to 10C. By noon, I was don't to my jeans and undershirt 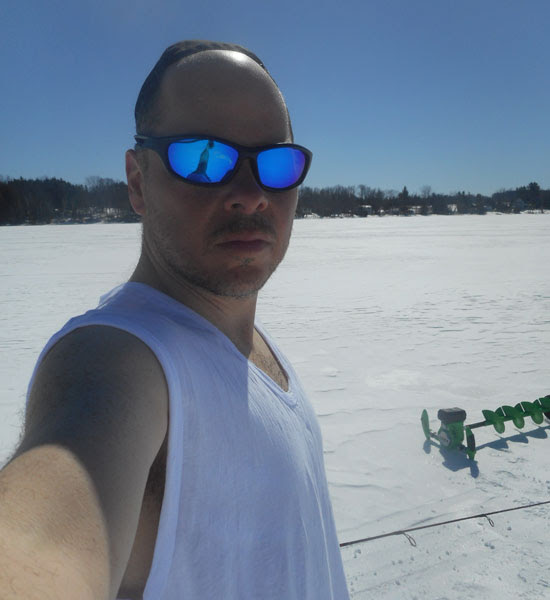 As I cooled down, I alternated between my hoodie, and shirt, and undershirt throughout the rest of the afternoon. Here is a short video clip I shot later on in the day:

Back, to my outing's tale, it took my nearly another 3 hours to find my second good catch of the day, on my 32nd ice hole. This time, I saw some smaller mark and one bigger one following my rattlebait on the Humminbird Ice 35 flasher. Not able to get them to commit, I dropped my W3 Jigging Rap, and got an immediate hit. Another good fight, and I eventually eased a good 24 inch / 3.5 lbs pike onto the ice. 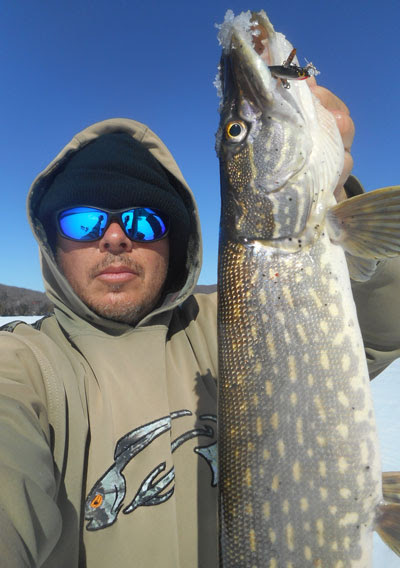 Kept that one for the table, as I don't plan on fishing for pike in clean waters until early June.

About 1 hour and 5 ice holes later, I managed another good largemouth bass, though nowhere as big as the first one. Measuring a bit over 16 inches, I'd guess it was slightly under 3 lbs this time of year. 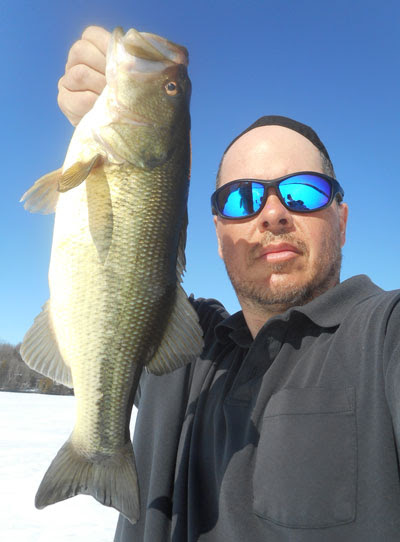 Another quick release, you'll noticed the girth difference in relation to my ice hole compared to the first bass of the day. 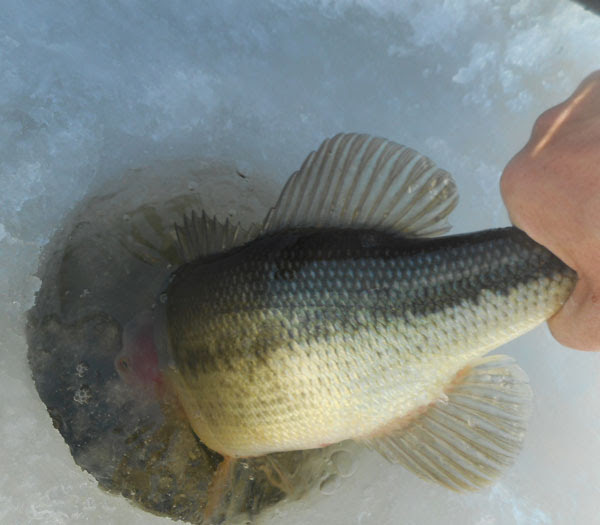 All in all a very satisfying final ice outing of the season for me, which ended on a very positive note.

Although this ice season might not have been as productive for numbers and big trophy fish, I am still elated at having landed my first few smallmouth bass on ice, including my first ever which was a good 4 lbs lunker. Today's big largemouth bass was the icing on the cake.

Even better, I achieved my goal of exploring more new lakes on ice than ever before, fishing 6 new lakes I had previously never been to, in addition to picking apart a few more I had only tried last season. In doing so, I also managed to fish more zones in winter than ever before. My total is now up to 9 zones in one winter, hitting zones 5, 6, 8, 9, 10, 11, 12 and 15 in Quebec, plus zone 18 in Ontario.

As always, I thank God for the opportunities He has given me that allow me to practice and enjoy my lifelong passion of sportfishing, no matter what the season. I also thank my wonderful wife for putting up with my obsession. I truly believe that behind every good angler, there is a real tolerant / patient woman.

Looking forward to hitting open water over the next couple weeks, while winter rules are still in effect until March 31st.

Posted by Freshwater Phil at 5:46 PM