Spring and fall are typically the best times to land big carp, but as the the big females get ready to spawn, they are at their heaviest in mid to late spring. Once the water temp reaches the 10 degree Celsius range in spring, carp become a a lot more active, and start putting on the feedbag before the spawn.

Accordingly, spring is by far the best time to potentially beat your personal carp record, at least to try and come close to it. A fellow carp fishermen invited me to join him for a few hours one evening last week, to a spot they'd been pre-baiting for a few days. Pre-baiting is a great way to draw in carp to areas you plan to fish, and their work paid off quickly with one of them landing a decent 20 lbs carp within the first 40 minutes or so of our outing.

The flip side of baiting a spot, can be over baiting, especially in cold water. It's very easy to be tempted to bait up after catching a carp, especially when you see them actively surfacing and bubbling near the surface. However, if they are in a negative mood, the more food you put in, the less chance you'll have of getting any bites. It can be a tough call at times, so I personally prefer to proceed with caution, throwing in as little food as possible when the water is still cold.

After fishing into our night session without any more hits between the 3 of us, I decided to put on on of my Fireball boilies, and cast a good 100 feet or so away from the area that was being baited all through out outing. Figured I'd have a better chance at getting a hit once the positive feeding window turned on, as the carp would have less choices other than my bait to go for. Sure enough, the move paid off, I had my first night carp of the season on within less than 1 hour. A chunky female that put on a feisty battle, and much fun on the small 8 foot rod I was using. 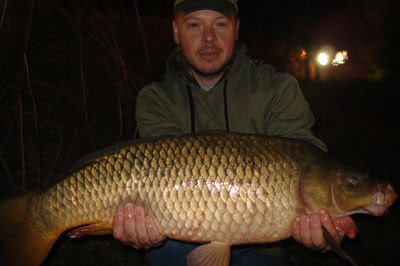 As it was past my bed time and my mission was accomplished for the night, I headed home, knowing that I'd have another nice days on the water with Eli the next day.

The following morning, Eli and I headed out to one of my regular hot spots for some more carp. Though the average fish there is slightly smaller throughout the summer, I've caught some very nice sized cap there in the spring. We set up shortly after 10:30AM, and within the first hour, Eli had his first fish: 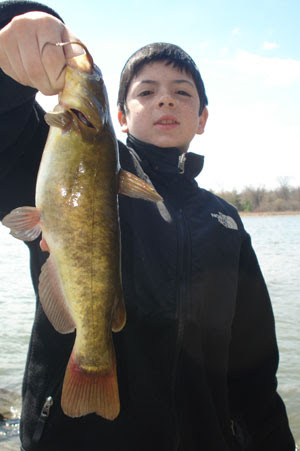 Not exactly the target species, nor anywhere near the intended size, but at least the Fireball boilie managed to attract some attention.

After missing another run on a Fireball boile, I decided to start switching baits. Sometimes, going out of the ordinary can be a good thing. Eli picked a Black Magic boilie, which I typically use in warmer water, as I hadn't had much spring results with them in the past.

Took close to an hour, and the rod went off. Eli set the hook, and the carp didn't take long to wedge the line into a submerged rock pile. I tried to pry it out, but no luck. After setting the rod down for a few minutes hoping the fish would pry itself loose, I decided to walk along the bank tugging at the line from different angles. After walking about 100 feet or so, I finally felt some give in the line, and put steady pressure on it. I felt my shock leaders scraping in between the rocks, and suddenly, a big head shake, and the fish was free! I kept pressure on the rod all the while running back towards Eli and handed him the rid.

Eli handled to big 12 foot rod like a pro, following my instructions to a tee. When the fish finally surfaced, I knew Eli had just beaten his previous record of 24 lbs. I netted the big carp, lifted onto the landing mat, feeling it's weight I knew it was pushing the 30 lbs mark. Eli guessed it's weight at 27.5 lbs, I guessed 29. Weighed in at exactly 30.25 lbs:

As I got my camera out snap some pictures, to my horror, it jammed, and started acting crazy. No worse time for my camera to go, but we were extremely lucky to have someone else I knew fishing further down the bank. He came over and snapped some pictures for us, saving the day. 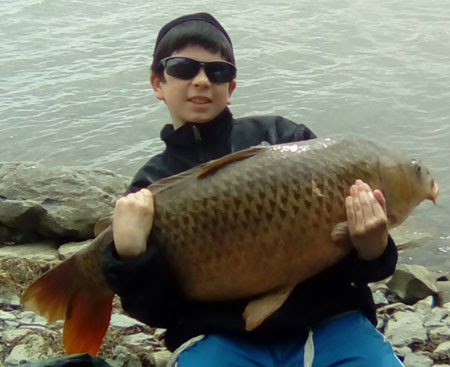 Eli had not only smashed his previous record of 24 lbs  set last summer, but he'd beaten his 3 older brother's records as well, earning himself bragging rights (for now).

Fishing was very slow for the next few hours, until about 4:00 PM. Eli caught another nice carp, this one a 20 lbs male, that was kind of thin, but quite long. Again, another angler on the bank stepped in as my camera was out of commission. 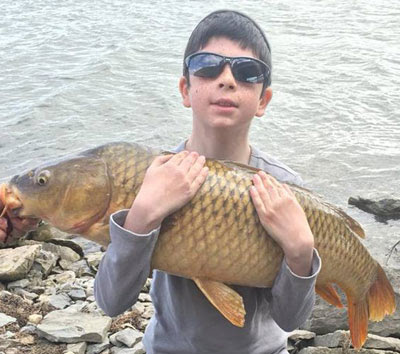 The outing ended with 2 back to back runs, one getting cut off in the rocks above my shock leader, and the other with Eli landing a smaller carp in the 13-15 lbs range,

Needled to say, Eli and I are both thrilled that he's joined the coveted 30's club for carp, and I was particularly happy that the big carp hit one of my boilies.

A new batch of boilies is now ready, which means that I have some extra for sale in limited quantity. Order today by clicking: http://www.freshwaterphil.com/carp-bait-boilies.cfm

My carp guiding season has begun as well, book early to ensure the date you want is still available, click: http://www.freshwaterphil.com/fishing-guides.cfm
Posted by Freshwater Phil at 8:34 AM