Fishing for spawning carp is tough

With the warming weather and water temp, I knew the carp spawn was imminent. Was hoping to be able to hook a nice fat carp before their drop their eggs. Figured I'd test some new boilies and new Fox Arma point hooks for the first time.

Ari was scheduled to come along, but landed a summer job the previous night, guy wanted him to start right away. I ended up alone on this outing yet again.

Got to my spot, found a few people other fishing for carp there. Most weren't catching much, but one guy landed a very nice 36 lbs carp a few minutes after I arrived, just as I was setting up.

Caught my first carp within less than 1 hour. Kind of small, maybe in the 10 lbs range. Fell for a garlic pepper boilie about 2 minutes after I switched over from sweet vanilla. The bite then died down, no one caught a thing for about 4.5 hours. My rod finally went off, caught back to back 20+ lbs carp, the second a fat female ready to spawn, which fell for the sweet vanilla boilie. 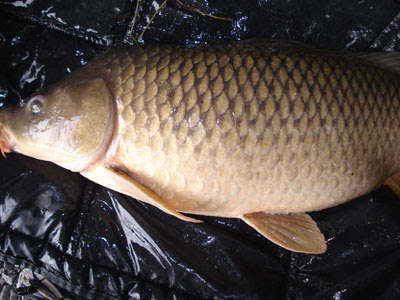 The Fox Arma Point hook worked better than expected. All 3 carp were very solidly hooked in the lower jaw. The hooks also nicked rocks a couple times, yet the hook was intact by day's end, never need to hone it or switch hooks. Half the price of my ESP curve shanx,  more resistant to point damage, and readily available in various North American tackle shops. Couldn't be happier with them, so far so good.

Noticed some spawners out on a flat on my way home, along with some jackass bowfisherman killing them at there most vulnerable time. I guess he isn't good enough to target them using conventional methods, as the bite during the spawn is extremely tough. Personally, I'm going to wait until they are done spawning, and spend the next couple weeks targeting other species.

Posted by Freshwater Phil at 4:07 PM