After the recent success my 8 year old son Eli had while catfishing last week, it was Avi's turn to take a beating his personal best, which is always a possibility this time of the year.

We headed out for a short evening outing, got the lines in the water at 8:00 PM. The flurry start quite quickly, Avi landed his first catfish of the season around 8:15. Quite small for the spot, the catfish weighted about 3 lbs. He followed up with another small catfish about 5 minutes later. Seeing the catfish were less than average, he was starting to get discouraged about his chances. I told him not to worry, and that the bigger ones would start feeding shortly.

Sure enough, it took about 10-15 minutes, and his line went off again. As he set into the big catfish, he new it wasn't a small one this time around. The big catfish put up a nice fight in the current, peeling my tightly set drag a few times before I finally scooped it up with my landing net. Only thing bigger than the big cat's head was Avi's smile, as he instantly knew he had shattered his old record by far. 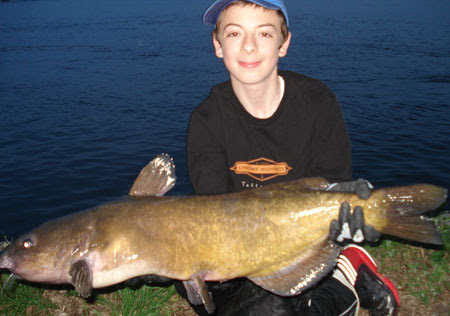 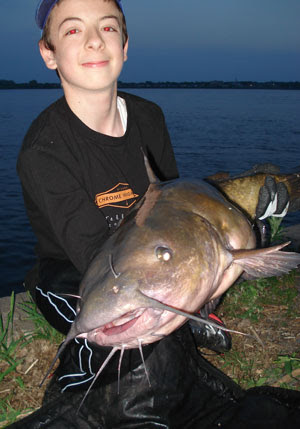 Fish weighed in at exactly 16 lbs, shattering Avi;s old record of 9 lbs by 7 lbs. We also cam very close to topping my personal record for channel catfish which stands at 16.5 lbs. Season is still young, he may get another crack at it before it ends.

Posted by Freshwater Phil at 4:44 AM