Went down South for Ari's high school graduation in Dallas, Texas for a couple days. Made sure to save one day to take him fishing as his graduation present, decided to splurge and hire the top guide in the state (and possibly the world) for alligator gar. Captain Kirk Kirkland has caught over 10,000 gar in his life, including over 3000 alligator gar that he has tagged for Texas Parks and Wildlife department. He fishes gar 7 days a week, from April thru October, and rarely has a day that he isn't booked, often for a full week at a time by visitors from around the globe coming all the way to Texas to fish for monster sized alligator gar.

Drove through the middle of the night to meet "Captain Kirk" near the Trinity River at 5:45 AM, about 160 miles Southeast of Dallas. Dropped our car, and hopped into his truck for the rough ride ahead. We launched his boat of the worst "launch" I have ever seen. Basically, a bulldozed cliff off a steep bank, the angle being impossible to launch from, at least in my view. Kirk explained that it was left that way intentionally, to keep the "riffraff" off their spots.

His off road 4x4 pick is equipped with high end tires specialized for mud, but the truck still seems to simply slip down the cliff as he back the big Jon boat down into the tiny creek that leads to the river. His boat is equipped with a 115 HP jet propelled engine, which avoids any prop damaged in the shallow, stump laden waterways he fishes.

Into the boat Ari and I hopped, and off we were, flying under overhanging trees at high speed. Luckily, our captain knows the river like the back of his hand. We got to the river within a few minutes, and then ran down a few miles to fish the first spot. Time for the preliminary fun to begin... 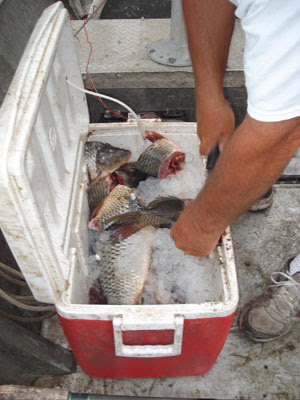 Redneck enough, until I'm surprised to see him pull out banksticks and bite alarms used for Euro style carp fishing. I am amazed at the innovation, perfect marriage between Euro style and Redneck style fishing. 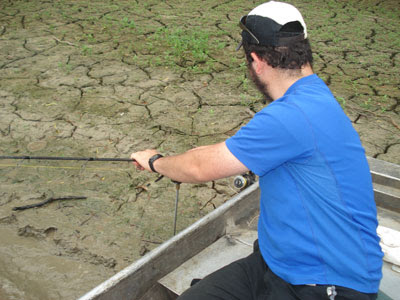 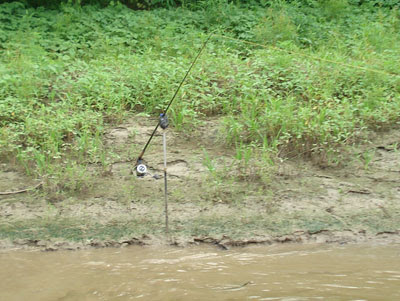 Sure enough, it doesn't take too long, and Ari is up for his first experience with alligator gar. We head over the the running rod, Ari lifts it off the bank, and we slowly follow the gar around for a good 10-15 minutes, to give it time to properly take in the big chunk of bait. Eventually, Ari sets the hook upon the captain's orders, and fight a small alligator gar to the boat, ends up spitting the hook at boatside.

No problem, the day is young, we set up again just in time for another rod to go off. This time, the gar somehow ends up cutting the line above the leader, probably double back and came over it.

3rd time's supposed to be a charm, Ari gets the next line, and finally hooks into another taker. Only problem, it ends up being an alligator snapping turtle instead of alligator gar. 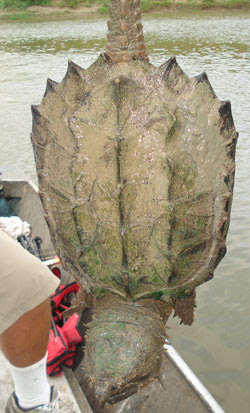 4th run ends up being a gar, Ari works it to the boat. Captain Kirk slips a noose over the gar, then hauls it overboard. No sense in trying to net fish that often reach lengths of over 7 feet, and filled with hundreds of razor sharp teeth in their massive jaws.

This one isn't too big, probably in the 35 lbs range. Not a monster by Trinity River standards, more like a baby. But still a nice sized fish for us Northern "city slickers". 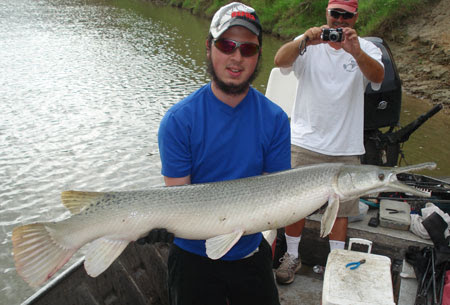 Next line is finally mine, I set into my first alligator gar. Captain Kirk's heavy duty gear makes short work of the river monster, end up measuring 61 inches, but weighing over 65 lbs due to it's thick girth. My biggest fish so far! 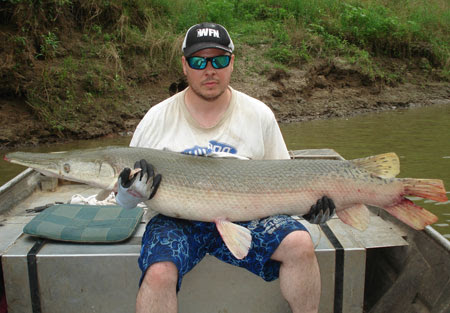 After catching a couple more, a unexpected cold front blows in, bringing a major storm. For those of you that haven't experience a Texas storm, they are more intense than the ones we get here, especially when you're out on a boat in middle of nowhere. Despite the umbrellas and makeshift ponchos made of garbage bags, we end up soaked and freezing. In a strange turns of events, the river I planned on swimming in if it got too hot, now ends up the only way to warm up, as the water temp is a good 15-20 degrees warmer than the outer temp. I hop in, feels amazing, kind of like a hot bath when you're shivering in the cold.

As I'm floating in the warm water under heavy rain at boatside, another bite alarm goes off. I hop in, we head over to the line, and follow this fish until I set into my first hybrid gar, which is basically a cross between alligator gar and longnose gar, to the both species using the same spawning grounds, leading to cross fertilization of their eggs. Quite rare in comparison to alligator gar, it's only the 3rd one landed this season in his boat.

This fish had the meanest attitude of them all, went ballistics, and kept snapping at use at boatside, trying to chomp down on the lasso. Finally landed it, a good 35 lbs hybrid gar, with a snout significantly narrower than the alligator gar, but still filled with rows of big, sharp teeth. 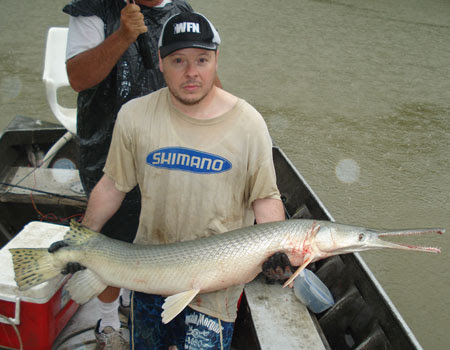 Contrast the snout of the alligator gar: 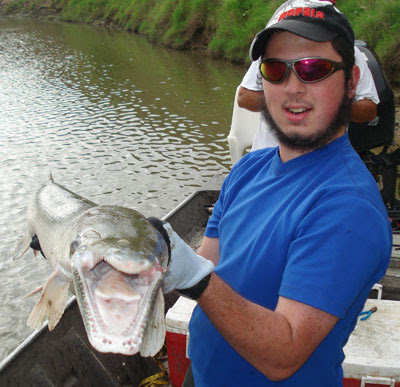 With that of the hybrid gar: 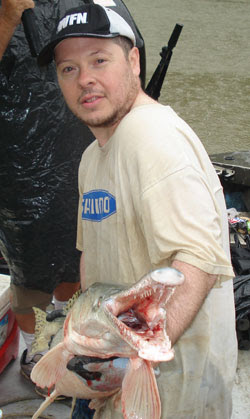 The storm eventually dies down, sun comes out, and the fish start hitting all over. We end the outing with a double header, which almost ends up being a triple header. 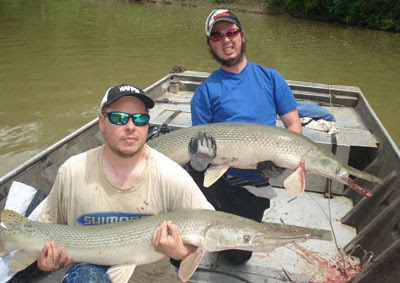 Getting the boat up the now freshly muddied banks proves to be a nightmare. Took two hours , fighting inch by inch using a 12,000 lbs winch and the 4x4 in low gear, all while being attacked by fire ants.Quite the experience to say the least. 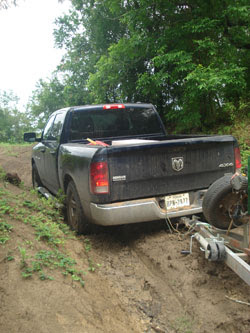 All in all, the trip was a blast, loved catching alligator gar, even though we didn't hook or land any over 100 lbs as we had hoped for, though we did land a total of 8 alligator gar from 30 lbs to 65 lbs, as well as the hybrid.

Quite sure I'll try again if ever I'm down in Texas during gar season again. Shot some video footage as well, check it out on youtube:

Posted by Freshwater Phil at 2:51 PM