Trout fishing in the Colorado Rockies

Just got back from a 2 week vacation with my wife and 3 younger kids, spent some time with my in laws in both Dallas, Texas and Trout Lake, Colorado. Though I typically avoid Dallas in the summer to to the extreme heat, we chose fly there and make the long 965 mile drive to trout lake due to airline ticketing blackouts from Montreal to Southwest Colorado.

After spending the weekend in Dallas, we packed up the humongous Ford Excursion my father in law was kind enough to lend us for the trip, and headed up to their chalet on Trout lake, which is located in Southwest Colorado. Located in a valley between 13,000 foot peaks, it lies at about 10,000 above sea level, by far the highest elevation I've ever been to. Left Dallas just after midnight, and drove West across Texas through the night, reaching New Mexico shortly after sunrise. The kids had slept through the night, but were now awake, and ready for their first of about 10 bathroom stops. Due to the change in elevation, we all needed to stay well hydrated, which also meant frequent bathroom stops, as the 3 kids we brought along are our youngest, aged 1, 4 and 7 years old. We finally made it to our destination 17.5 hours later, by mid afternoon mountain time.

After unloading and going about 25 hours without sleep, I decided to head down to the lake despite the intermittent rain, just to scope out the new territory and make a few casts while I was at it. The view is truly breathtaking, especially at that altitude, which make it tough to climb hills or do anything strenuous before getting a bit used to the altitude. Here is the initial view I had of the surrounding mountains: 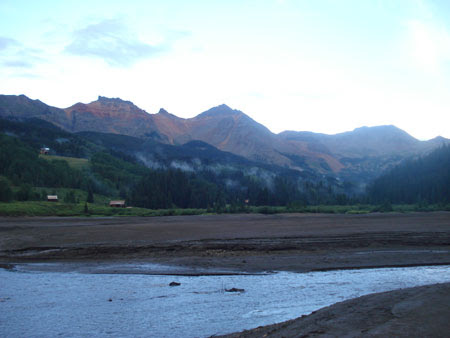 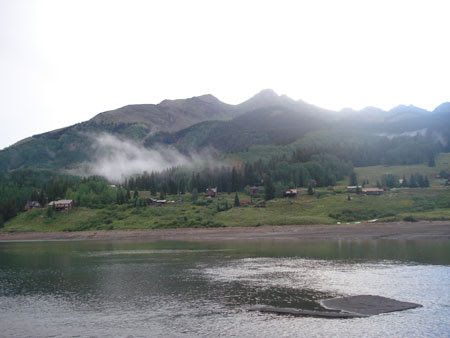 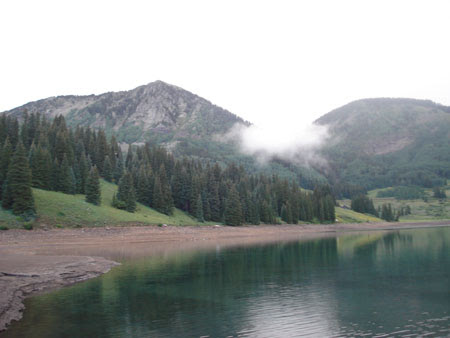 The vast amounts of sand and shoreline around the lake are the result of the lake authority draining the lake to repair the dam this year. Trout lake was a good 30 feet low, and reduced to less than half it's normal size, probably only a third of the water it normally holds. To make matters worse, it hasn't been stocked in nearly 2 years, as they were planning to drain it, so I was left fishing for a mix of holdover trout, some babies, and some type of sucker native to that region.

I immediately spotted some big suckers cruising the shore line, but only had a few trout lures I had brought along. After trying a few lures, I decided to tie on a trout pattern Rapala J7. Second cast yielded my forst catch of the trip, a nice 13 inch brown trout: 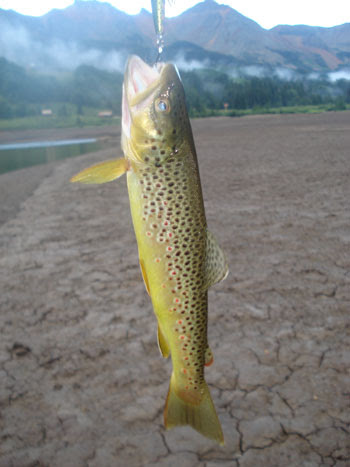 Headed up to the chalet to fillet my catch for breakfast the next morning...

Drove into town with my brother in law, closest towns a Mountain Village and Telluride, small tourist villages that operate on seasonal (mainly skiing) tourism. Picked up some groceries and some worms as well, in hope of catching more trout, or at worst, some of the suckers I had seen the previous day.

Got back to the chalet, and headed down to the lake around noon, to try landing some more trout with the kids. After missing a follow from a brook trout on the J7, I handed the rod to my brother in law to give it a try. Sure enough, the trout came back after a few casts: 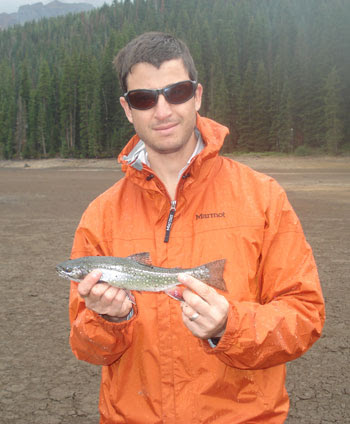 No such luck for me, though I spent some time sight fishing for suckers, which were quite predictable: 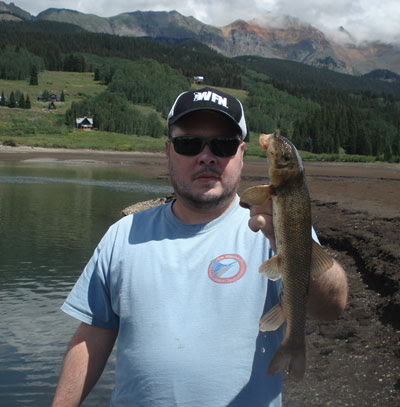 Eli landed a nice one too: Tried to get the younger kids to help me stalk more suckers, but they were way to noisy, and ended up spooking the suckers each time I found some along the shore lines. Not much of an evening bite, though I did see tons of tiny trout rising and eating small bugs of the surface during a hatch. Not much more than a couple missed strikes from some smaller fish.

Headed out before sunrise in order to determine whether or not the fishing would be better near sunrise and sunset as it often is on many bodies of water. Caught the sun rising between the peaks across the lake: 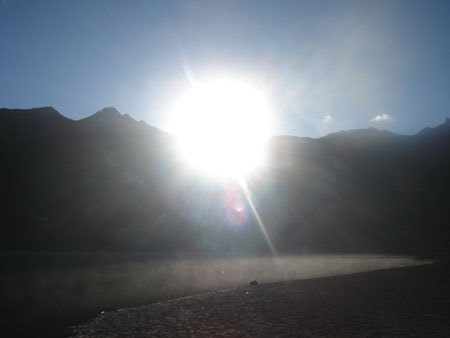 Caught my first rainbow trout of the trip shortly after, again on the Rapala j7: 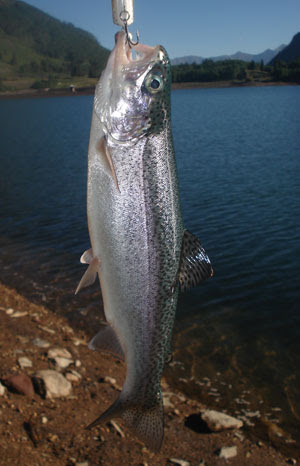 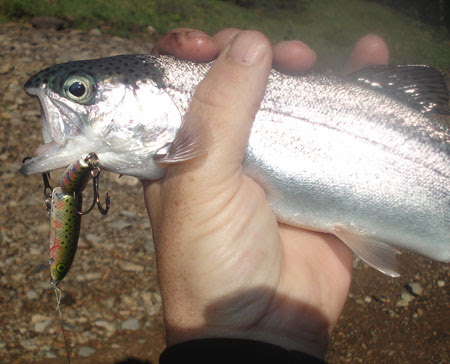 Not much else hitting, I sight fishing for some more suckers: 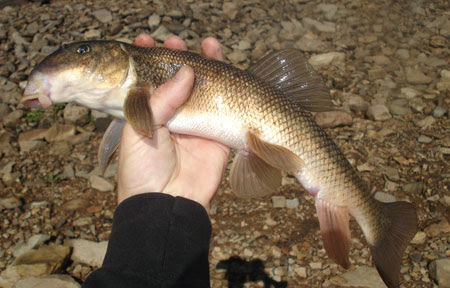 I headed up to the chalet to fillet my catch for breakfast, along with the brook trout from the previous day. A true breakfast of champions: 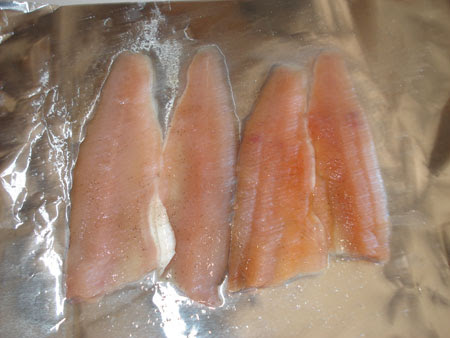 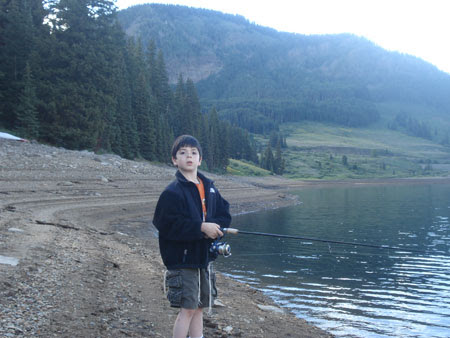 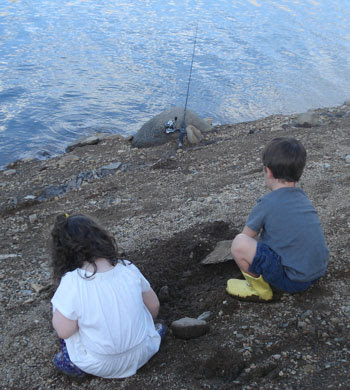 The short outing paid off, landed another rainbow trout with the kids: 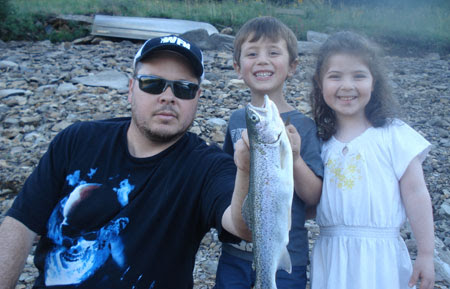 Again, that was all for the day, as it was starting to get dark.

By this time, I had noticed that the only lure the trout were responding to at all was the Rapala J7, despite my trying a variety of lures, spinners, spoons and worms. I headed out for my standard morning walk around the lake casting the J7, yielded another brown trout, a chunky 14 incher, which I brought back up for breakfast: 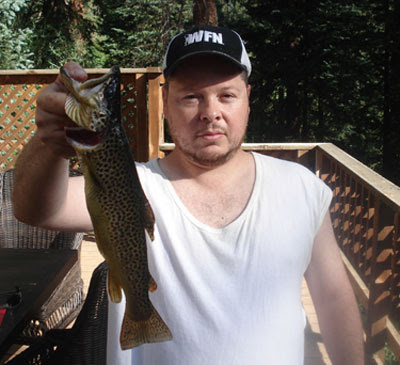 I was ten put on babysitting duty watching the 5 kids, while my wife, her brother and his wife went on a 5 hour hike. by the time they returned, I was more than ready to hit the lake for another pass, which turned out to be the most successful of my trip. Landed another brown trout and 3 more rainbow trout all within about 1/2 hour. Kids were thrilled to see all those fish coming out of the lake: 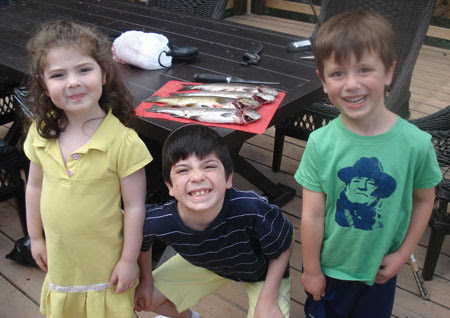 Also spent some time trying out riding ATV trails for the first time: 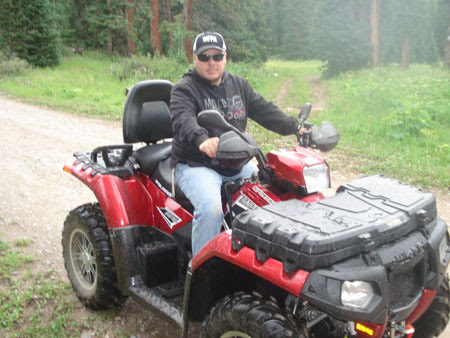 Also took the kids to twon, got to ride the free "gondola" cabale cars  between Mountain Village and Telluride: 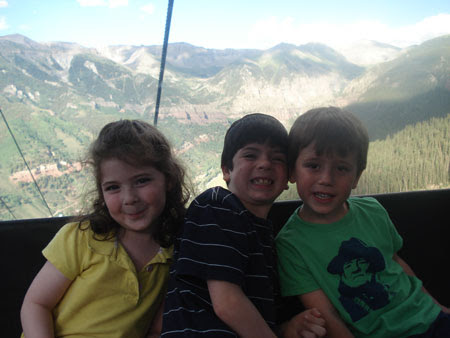 No trout biting, though I didn't get around to fish too much due to intermittent thunderstorms. My brother in law left with his family. The storms made for some nice rainbows: 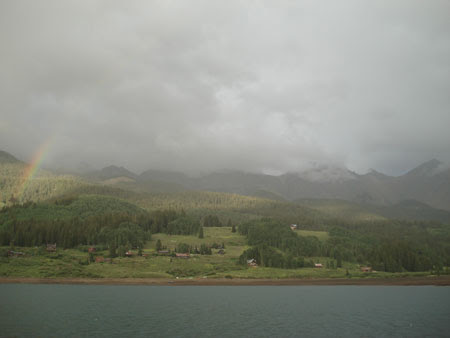 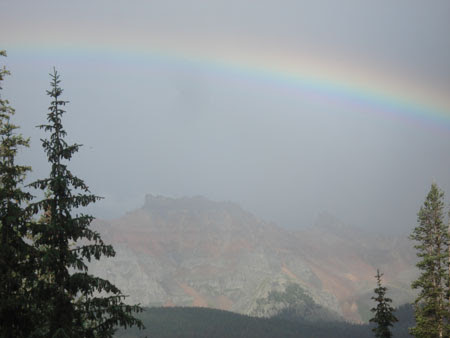 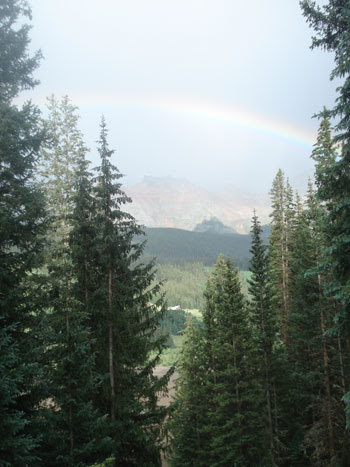 Again, no trout biting, and to make matters worse, the heavy storms muddied the water enough to where I wasn't able to sight fish for suckers either, though that didn't stop Eli and I from going out: 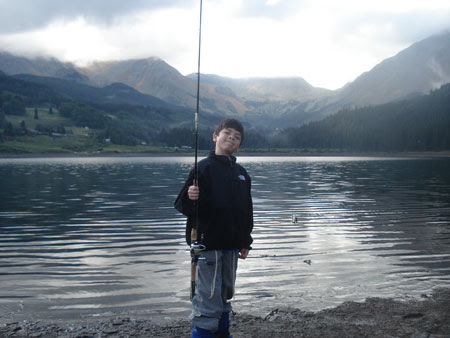 Trout lake rose about 1 foot over the few days I was there, though still very empty: 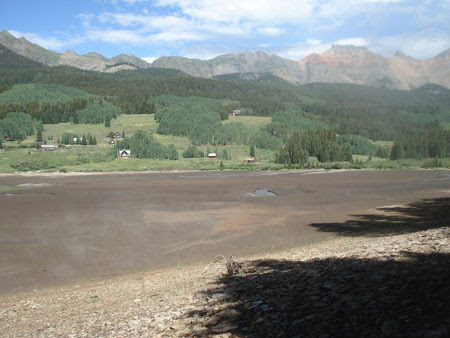 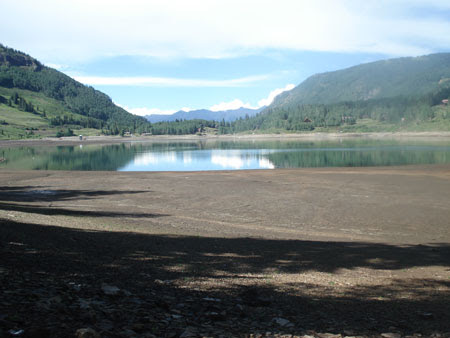 Spent Saturday enjoying the scenery and weather, which averaged about 20 to 25 degrees Celsius during the day and about 10-12 degrees overnight. Drove back to Dallas early Sunday morning. Was very surprised that there we no biting bugs at all, no mosquitoes, back flies and horse flies that I'm normally used to when fishing the woods in Quebec. Hope to go back in the future, plan to get a small boat to keep at the chalet on Trout lake once it's refilled and restocked in future years.


Posted by Freshwater Phil at 9:41 AM