After returning from a 2 week long trip to Texas/Colorado, last week, I headed back South across the border, this time for a short business trip to Virginia. Of course, I decided to find some way to fish while I was down there. I was lucky to have fished with a group of customers from Virginia last year, one of them had worked as a fishing guide near Norfolk in the past. After asking him for advice, I was faced with 2 choices:

1) Drive down to the coast and fish some wrecks in Saltwater. Unfortunately, this would leave little time for business, which was the main goal of the trip. It was also quite expensive, in the $600-$650 for a half day outing.

2) Fish near Richmond (the area I was in) for big blue catfish. Being that we are in mid August, our best bet would be to catch them at night, so it worked out perfectly with my business schedule, and the outing was also a lot easier on my wallet, $300 for an 8 hour trip.

The choice was clear, I chose to stay inland in freshwater and chase some big cats, after all I do call myself "Freshwater Phil" for a reason....

The guide I was recommended was captain Josh Fitchett, who runs Rivercat'n guide service. Captain Josh is by far the top catfisherman in the state, and possible the entire region. He holds many river records, as well as some state records. Basically, the best person to go to in Virginia if you're looking to land some monster catfish, his personal best is a whopping 98 lbs.

Due to my proximity to the James River, we decided to fish it over the Potomac. Captain Josh and I met up at a local marina, and launched around 6:30 PM. First job was to go and catch some bait. Apparently, the blue catfish in the James river prefer fresh caught cut bait, probably due to the huge shad population in the river. Catching bait for immediate use is the only way to ensure success, so off we went: 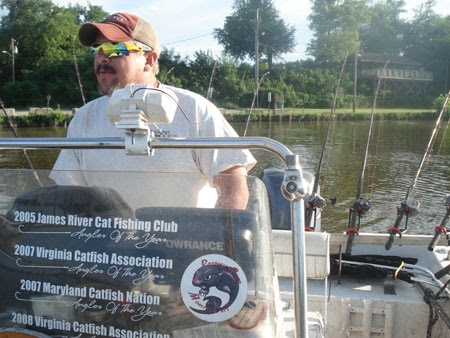 To catch bait, Josh uses a long gill net with a bunch of floats. Deployed the net in a spot full of jumping shad: 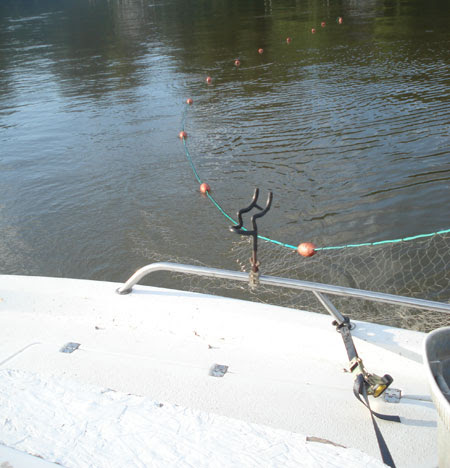 Within a couple minutes, we had more than enough bait, catching about 40 or 50 shad in the  1 lb range, perfect size to be cut into 3 chunks. 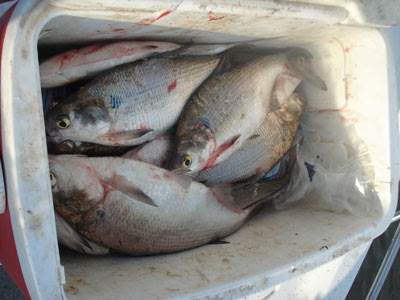 The area of the James river we fished is tidal, and we set up on a spot favorable to fishing the incoming tide. In contrast to our strict rod limit laws, Virginia is extremely liberal, allowing anglers to fish with unlimited rods. Captain Josh's rods are extra heavy e glass, outfitted with various levelwind reels such as the Shimano Tecota, spooled with 50 lbs mono line, with 100 lbs leaders. They are rigged with 16 ounce (1 lb!) sliding puck sinkers, same style as ones we use for sturgeon in big current. Business end of the lines are 8/0 - 10/0 Circle hooks, again, almost identical to what we use for channel cats, just a lot bigger.

Despite being what one may call a "city slicker", I'm a bit of a redneck at heart when it comes to fishing, so  with 10 rods set up with cut bait, anchored on the James River with it's monster cats, watching the sunset waiting for that first bite while sipping on cold beer, I was in catfishing heaven: 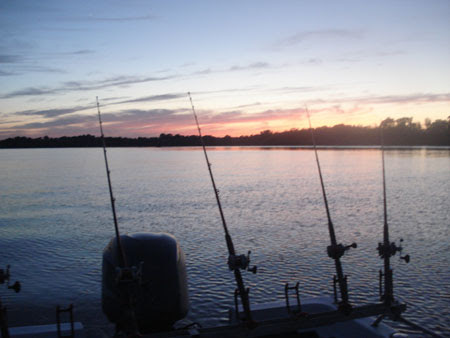 Weather was unseasonably cold for mid August in Virginia, probably in the 65 degrees range, while water was still quite warm at 83.5 degrees. Captain Josh was concerned about the cold front, hoping that it wouldn't affect the fishing too much.

First bite finally came about 1 hour after dark, Didn't take long for me to winch in my first catch. Though it seemed a lot smaller in the net, I was very surprised to see it come on deck, and nice 30 lbs blue catfish. It was my first ever, and nearly doubled my personal best channel cat (16.5 lbs): 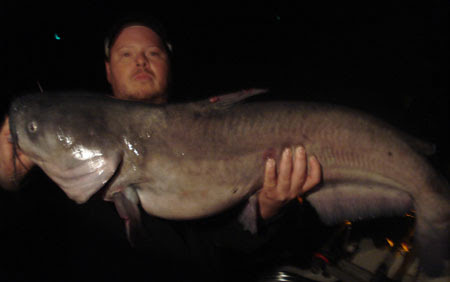 The big surprise was the ease of the fight on heavy tackle. This was confirmed on my next catch, a puny 5-6 lbs blue catfish, which I didn't even know was on the line any more. At this point, I realized what fishing with 1 lbs sinkers on extra heavy tackle could be like. Josh pointed out that his specialty is BIG cats, and that I'd have a fight on my hand once we hooked into a nice one.

Around 11:00 PM, the tide stopped, and we switched spots to fish the outgoing tide. Landed some more catfish in the 20-25 lbs range, as well as some smaller 10-15 lbs catfish. At 2 minutes to midnight (one of my favorite Iron Maiden songs), the outer rod doubled over, drag started peeling off the reel in the holder. I picked it up, and immediately knew the reason why Josh uses the heavy tackle. I finally had a drag peeling fish on, fighting hard and running directly for at the other nine lines still in the water. Josh did a great job at keeping the lines tangle free, and even better netting job on the furious monster.

My eyes nearly popped out of my head when I saw it on deck, a real James River Monster, weighed in at 59 lbs, again doubling the new personal best I had just caught a couple hours earlier: 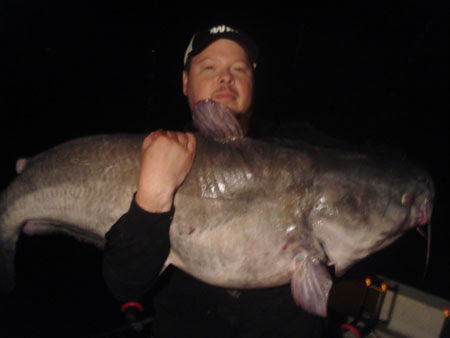 Didn't have a pair of gloves, so I was a bit apprehensive of getting bit by holding the fish by it's mouth with one hand, but only ended up with some minor scrapes and ton's of thick slime on my clothes. But every good fisherman knows that slime is a sign of success, and I was quite happy to get my old fishing sweater slimed once again.

Caught some more catfish up to about 25 lbs hours, and we call it a night around 2:00 AM. 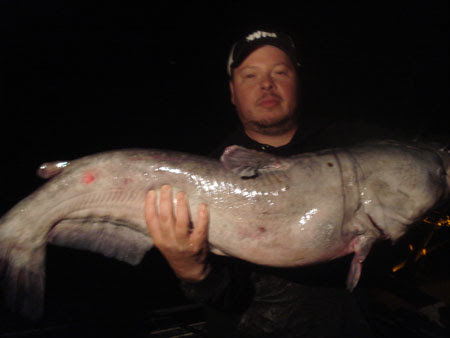 Was thrilled that my first big catfish outing exceeded my expecations, though captain Josh played the night down and said it was quite "slow" by his standards. One things for sure, if I ever find myself in that area gain, I know who I'll be hooking up with for another outing. RiverCat'n guide service and Captain Josh can be contacted on their web site at: http://rivercatn.com


Posted by Freshwater Phil at 6:36 AM