In 2008, my son won the Le Tournoi de Peche fishing tournament sponsored by the FPQ. One of the prizes was a week long, bear hunting and fishing trip to Le Domaine Shannon. As we don't hunt, we didn't bother doing the June bear hunt. Though it's been nearly 2 years, I finally made it up to Le Domaine Shannon for the free trip with my older son Ari.

Though the trip included meals, I didn't go with that option as I keep kosher, and prefer to be alone on a lake without the fishing pressure / noise of all the other fishermen at the lodge. So we reserved a small cabin on Lac LeNotre, (aka Katch).
Le Domaine Shannon is located north of Zec Petawaga, near the reserve faunique de la Verendrye. The main lodge on Lac Seguin is about 365 KM from Montreal, the 2 cabins on Lac LeNotre are another 28 KM North.

We headed out on Saturday night, around 2 AM, reached the forest road past Grand Remous at 5:00 AM, following signs to Le Domaine Shannon as well as about another dozen or so outfitters in the region.
Heading up the road at daybreak, we were greeted by a big black wolf that came rushing at our car. I swerved to avoid it, and was somewhat amused, as I was under the impression that they were more finicky. A couple minutes later, we spotted a mid sized black bear crossing the road. That's when I told my son that "we're in wild country now".
About 1.5 hours later, we arrived at the main lodge, about 1/2 hour before they opened for breakfast. We bumped into some American anglers that make the 600 mile trip from Pennsylvania each summer to fish Lac LeNotre for walleye. Apparently their dad has been going there for 47 years! 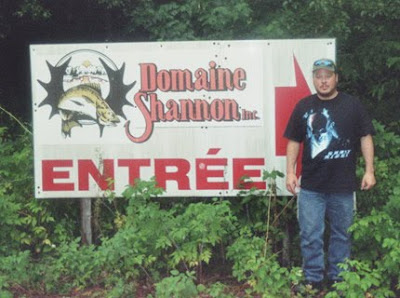 We finally met the owner Sylvain Danis, he directed us on where to go, and informed us of the outfitter regulations. Walleye have a slot limit of 12 - 22 inches at the fork, and pike must be over 24 inches. The bag limits are generous, allowing for 8 walleye and 10 pike per license, as they are located in Zone 14.
We headed out for Lac LeNotre a bit after 7:00 AM, and spotted a rare cougar crossing the road with a rabbit in it's mouth. We arrived at our cabin around 8:00 AM, unloaded out gear and loaded the boat. 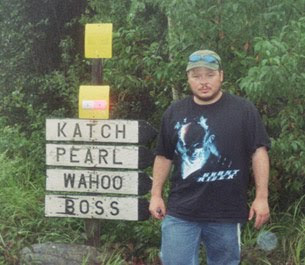 The cabin wasn't anything fancy, it was a bare minimum fishing camp, but equipped with propane lights, stove, fridge/freezer, as well as a bathroom with shower. 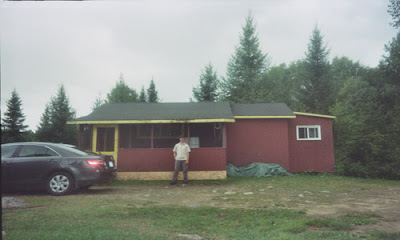 The boats were nice 18 foot fiberglass, with brand new 9.9 four stroke Mercury engines, which really made trolling enjoyable without the fumes of a 2 stroke. I mounted our portable sonar, which proved to be a crucial asset to our success. 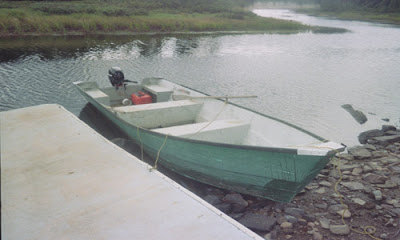 To get to the lake, we had to make our way down a small river, which was about 4 feet lower than usual. It made the way in and out of the lake treacherous, as it's only about 1 foot deep in some spots, and is filled with boulders. 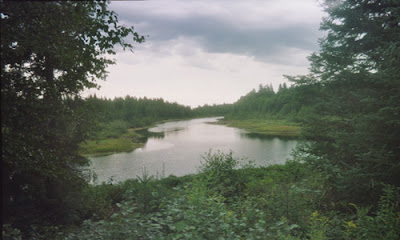 We got on the lake at about 10:00 AM, and the waves seemed big for our boat. We decided to attempt jigging, and set anchor. The stone anchor wouldn't hold, so we slowly drifted back towards the river. I hooked my first walleye of the trip with 5-10 minutes, a nice 16 inch keeper. 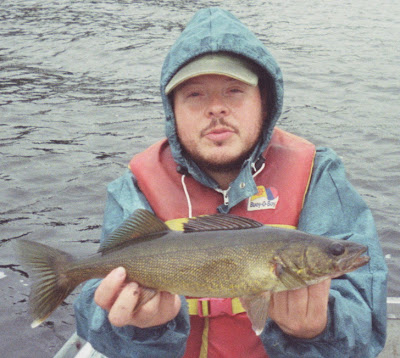 After attempting a bit more jigging without results, we decided to troll deep divers. I went with a Wally Diver, my son used a Blue Fox diver. Over the next 2 hours, I managed another 2 walleye, my son landed 1 and lost 2 more, all keepers in the 1.5 - 2 lb range. 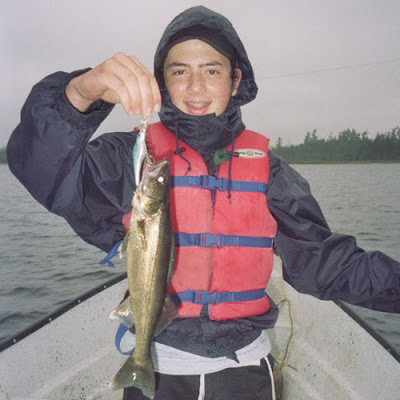 We returned to the cabin just as the rain started falling, as we had been inside a cloud all morning. I filleted the walleye, had some lunch and headed off to bed. The rain got heavier, culminating in massive in massive thunderstorm and lighting show over night, which actually shook the cabin.
Next morning, the sun was out, we decided to troll for pike. We kept the deep divers on, and sure enough I hooked into 3 pike that morning, only 1 was big enough to keep. 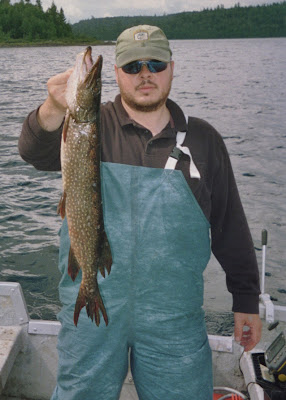 After filleting it and having a nice steak BBQ for lunch, we headed back to the lake. This time, the waves were a lot bigger than the previous day, made trolling just about impossible. Noticing big schools of walleye on the sonar, we tied on bottom bouncers, followed by a 4 foot lead with a simple hook and worm on my rod, and a worm harness on my son's rod. The method proved successful, we landed another 8 walleyes, all 15-17 inches, we actually had to start releasing them, as we were over the bag limit. We headed back to shore around 6:00 PM.
Next morning, the wind and waves got even worse, trolling was almost impossible again, though my son managed a couple small pike. As our walleye bag limit was already full, we headed back to the main lodge to determine if there were other lakes we could attempt for some of the monster pike we saw mounted in the lodge. Unfortunately, most of those lakes were only accessible in a 4x4, and we were in a car, as the rental company couldn't deliver the SUV I had reserved. In addition, we would have to carry the 100 lb + motors wherever we decided to go, so we decided to stay put. I bought a license for my son, so the challenge was now to catch another bag limit of walleye, as we ate enough walleye, until they we coming out of our noses.
We got back to the lake, and started drift fishing the waves after lunch. The wind and cloud cover helped, and within a few minutes I hooked into a bigger walleye, turned out to weigh 4.5 lbs. I was sure it was over the slot limit, but as it only measured 21.5 inches at the tail fork, so we kept it. 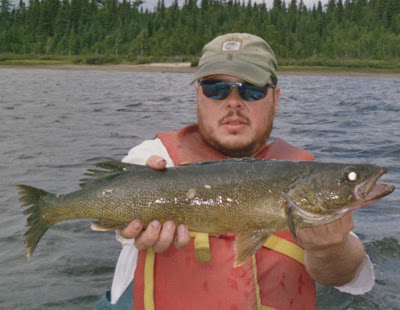 Next drift produced another big walleye, almost identical in size, but it was full of tumors all over it's body, so I released it. We then managed another 4 walleye, though my son lost one right next to the boat. 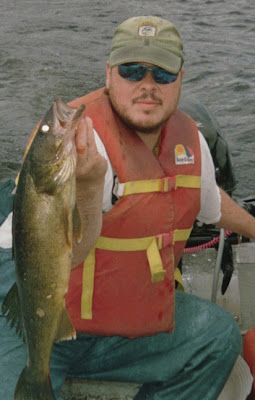 The drift died down with the wind towards the evening, so we started trolling again. My son managed another Northern pike, a 26 inch keeper.
Next morning, the sun was shining bright, not a cloud in the sky. We fished all day long, switching from trolling pike, to drifting for walleye, back to trolling deep diver. Not one hit for most of the day, until my son managed another walleye towards evening. At least we didn't get skunked.
Though we had the cabin reserved until Friday, I preferred to leave Thursday afternoon, so our Thursday morning challenge would be to catch the 3 remaining walleye for our bag limit. The lake was calm for the first time, slight rain falling. We trolled for about 1.5 hours, I managed 1 walleye that hit in about 50 feet of water, but lost it right next to the boat. As the rain died, the lake suddenly turned calm for the first time during our trip. The surface was mirror like.
I decided to try jigging a big school I had marked on the sonar. We got on top of them, dropped our jigs, and the bite was on! My son landed on right away. Not wanting to spook them with the anchor, I reversed right over them again as we had drifted off. We dropped our jigs and again, my son pulled another keeper out. This was getting too easy. I reversed again, dropped our jigs and bang, fish on again, I landed my first blue walleye.
We could have fished out the whole school, but our second bag limit was full again, and the mission was accomplished. I still had to clean the fish, make lunch, pack the car, and drive a good 5.5 - 6 hours back home, so we headed back to the cabin at 11:00 AM.
Overall, I was very satisfied with the quality walleye fishing we had. I must say that the sonar really saved our butts, we would have been clueless without it. It was the first time that I was that dependant on the sonar, and also the first time I was able to consistently catch the fish that we were marking. Even better, the entire trip was free.

I highly recommend Le Domaine Shannon for anyone interested in fishing for walleye or trophy in a clean, pristine setting of the deep woods of Quebec. For more information on or to contact Le Domaine Shannon, click: http://freshwaterphil.com/ledomaineshannon.cfm 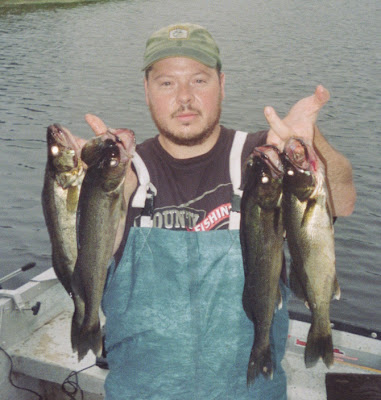 Posted by Freshwater Phil at 9:10 AM