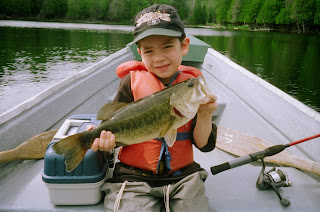 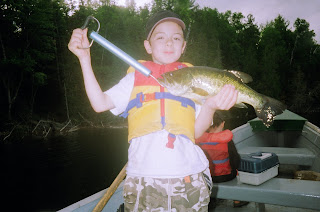 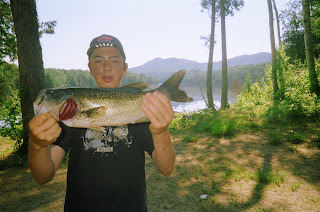 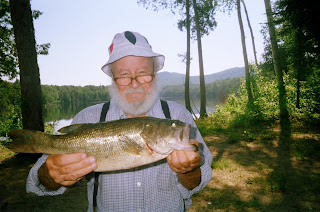 Just got back from our yearly family for the bass opener on Giles lake in Zone 10. We ended up gong with 7 adults, 2 teens and 6 children, rented 3 separate cabins for the week of June 21st to 26th.

We arrived at about 1:00 PM on Sunday, I immediately proceeded to mount the 2 motors and sonar a brought up on a couple row boats. Mine is a 25 year old 7.5 HP Mercury I recently bought and had fixed, the other is a 40 year old Johnson / Evinrude hybrid that my brother has been using for years.

Started off cathcing a nice 3 lbs bass on my first cast, things couldn't be better. After about 1 hour, my motor goes on me, so that put a serious damper on my day, considering that it's the first time I used it since buying it and spending just as much to change the prop and water pump. The outfitter has motors for rent, I got a brand new 5 HP Mercury for $25 / day, so it wasn't the end of the world, but I was still quite frustrated at the situation.

Headed out for another outing after unloading our gear and clothing into the cabing, caught another decent 2 lb + bass.

Over the next 4 days, we ended up catching about 75 Largemouth bass, most over 2 lbs with about a dozen over 3 lbs and 3 over 4 lbs. In addition, the kids caught hundreds of sunfish as usual.

My teeneage son was guiding the boat with my dad and his friend, I took the boat with my younger two sons who's main pastime is fighting each other. I started off trying to have the cast and fish with worms on bobbers and sinker lines, but the tangles and subsequent fights were just to much. Fishing is supposed to be fun and relaxing, not stressfull.

At that point in the trip, I completely switched tactics. I started casting a Pop-R and let the kids take turns fighting the fish. It was relaxng for me, and kept them on edge with each cast waiting for those thrilling top water hits. Over the next couple days, I ended up catching about 25 or 30 bass on the Pop-R, biggest was a 3 lbs beauty that took the lures all the way down it's hatch.

The lake has a small, dwindling, pike population, some of them up to 20 lbs. We tried chasing the pike using different tactics, all we managed were some small ones under 2 lbs trolling rogues.

We couldn't have asked for better weather, sunny skies all week, the temperature stayed at about 30 but felt more like 40 with the humidity. We fished mornings and evenings, spent the rest of the days swimming, snorkeling, making BBQ's and sipping cold beer. Night were for stronger alcohol and bonfires, as well as the yearly fireworks for La fete Nationale.

Hope to head back to the region for some pike fishing in a couple weeks.

I highly recommend Mijocama outfitter as a prime destination for trophy bass fishing and family fishing trips. For more information on Mijocama outfitter, or to contact them, click http://freshwaterphil.com/mijocama-outfitter.cfm
Posted by Freshwater Phil at 7:12 AM